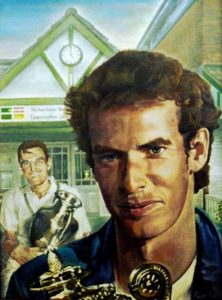 I play and enjoy following tennis and was very pleased to see Andy Murray from the UK win Wimbledon in 2013 after a period of 77 years since Fred Perry won it last in 1936.

Find out about Ladies tennis champions, including a portrait of Ann Haydon Jones, by visiting my Sporting Gallery

I play at my local club which was the first lawn tennis club to be set up in this country by Harry Gem in 1872 at the Manor House in Royal Leamington Spa, before finally moving to Guys Cliffe Road.

Its official title is the 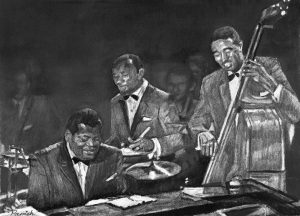 I created this painting of Oscar Peterson in concert for tennis friend and jazz musician Will Allen who I play now and again at the Leamington Lawn Tennis Club.

Will commissioned me to paint it as a gift to a dear friend who is also an Oscar Peterson fan.

It would have been Oscars 90th birthday anniversary on the 15 Aug 2015.

(Find his music at http://www.prestoclassical.co.uk/s_index.php in Leamington Spa UK)

Will, in turn kindly supplied the musical tune for my Promo Video on the homepage of my website.