See painting above ‘Why Beauty Matters’

I mostly work from photographic material, sometimes published, in which case I will change the look of the finished painting in some way to avoid copyright. I am often inspired by looking at photographs.

Most of my artwork has been developed from sketches, including my surreal compositions. These were inspired by looking at words and lyrics composed by various luminaries. From this I was able to visualize my thoughts in my minds eye and interpret it into a sketch.

The canal scenes and some of my railway scene paintings are created from my own photographs. However when creating a period scene, I will do some research and change the look of a painting to suit the period. 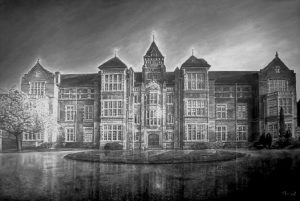 My main focus is The Warwick Collection which portrays various buildings in Warwick painted in black and white oil paints. They were commissioned by the Mitchell Gallery from 2009, based in Warwick.(UK)

This style of painting evolved through developing my black and white monochrome style in recent years through Warwick Studios Gallery in Royal Leamington Spa after the turn of the century.

The Warwick Collection is on display at The Michell Gallery in Warwick at 2 Church Street. Telephone 01926 408787.

The Warwick School Project from Inception to Canvas:

Warwick School in Myton Road, Warwick is a challenging piece of architecture to paint and it was commissioned by the Mitchell Gallery in Warwick during 2011.

I first prepared the outline faintly on the canvas by using a soft pencil and carefully following the layout of my sketch. Then carefully measuring up by ratio sizes from the photographs to gain a degree of accuracy.  At this stage, I was working on my drawing board, which I used to use as a Draftsman in my former career.