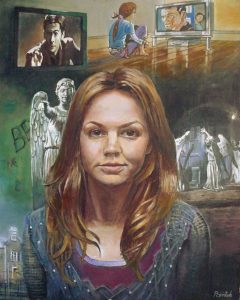 A weeping angel closes in on Sally Sparrow while her back is turned. One touch and she will be sent back into the past to a time before her own birth.

Here we have a portrait of Sally Sparrow played by Carey Mulligan in a Doctor Who episode called ‘Blink’ first shown in 2007.

This painting was part of an Art Exhibition to celebrate the greatest science fiction programme of them all, namely Doctor Who!

The Exhibition was inspired by the find of some lost Patrick Troughton episodes during October 2013 by Philip Morris.

All artwork is original, including oil paintings and sketches, picture postcards and jigsaw puzzles.

See my Doctor Who Gallery

My Doctor Who artwork can also be found at Coventry Music Museum.

A portrait of Delia Derbyshire (joint composer of the original Dr Who theme music) born in Coventry forms part of one of my images on show at the Museum.