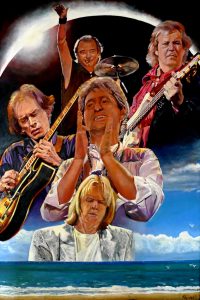 The band, like a tree of knowledge, rise up and reach towards the Sun

This is the Classic Yes line up (Howe, Wakeman, White, Anderson and Squire) as regarded by the fans

The title of my image was inspired by a 20 minute piece of music entitled ‘Nous Sommes Du Soleil’ (We are of the Sun) from the classic Yes double  album entitled ‘Tales from Topographic Oceans’. released in 1973 on vinyl with a gatefold sleeve and cassette.  Yes have always been one of my favourite Progressive Rock Bands and this album remains very popular with me and the fans today.

Such is the timeless nature of their music, both instrumentally and lyrically.

Their music has a TIMELESS BEAUTY.

Yes continue to create great music with their album ‘Heaven and Earth’ released in 2014. Sadly one of the founding members and bass player Mr Chris Squire died at the end of June 2015, portrayed on the right of my image above. He made a massive contribution to the sound of Yes music with his thunderous bass, choir boy backing vocal harmony sound and song writing ability. He created solo albums too and often worked on spin off projects with big names like Steve Hackett from Genesis fame and Billy Sherwood, who has now replaced Squire on bass.

Yes released an album in October 2021 entitled The Quest. It makes an enjoyable listen, with all the elements of the classical Yes sound in there.

See my Yes webpage at

Why not go along to a local Record and CD Fair in South Warwickshire.

I have been many times over the years looking to fill gaps in my music collection.

If you are looking for Rare Records and Posters, follow the link below 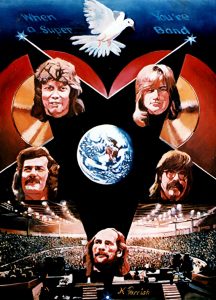 Its 1973 and the Moody Blues were attracting huge audiences at their concerts around the globe singing songs about love, peace and harmony.

The oil painting celebrates the Moody Blues becoming a Super group in the early 1970s, selling out large Concert venues around the planet.

This period is when, in my view, they released their finest albums starting with Days Of Future Passed in 1967 with Tony Clarke as Producer, sadly no longer with us.

Discovering them in 1970, I have followed the band members musical careers ever since and I

still play their timeless, beautiful and romantic music today.  They are the centre of my musical universe and have a TIMELESS BEAUTY..

In 2016 it will be 50 years since Justin Hayward and John Lodge joined the band.

In 2017 it will be 50 years since Days of Future Passed (perhaps their best album) was recorded.

For a tribute to Tony Clarke,(often called the Sixth Moody, because he was so important to the Moody Blues sound as their Producer), why not visit the Coventry Music Museum  and see my Tony Clarke artwork print and discover more about other Coventry’s musicians.

It is well worth a visit!