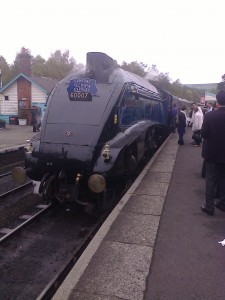 This was a day event at the North York Moors Railway near York during October 2014.

The General Manager of Samsung Techwin -Northern Europe (a friend of mine from my childhood) kindly invited me to come along to this event to help promote my railway artwork.

The Manager gave a Presentation at Pickering Station promoting Samsungs surveillance equipment in front of an audience of Samsung clients and employees during the morning.

This was followed by a Railway journey to Grosmont and back in the afternoon on the North York Moors Railway hauled by the Samsung Techwin Express Pullman train.

This comprised of an A4 Class locomotive named Sir Nigel Gresley no 60007, a famous preserved loco hauling a set of luxury LNER pullman cars. We had a 3 course meal on the journey, served by waiters re-enacting the 1930s, from the LNER heyday.

A wonderful, memorable day for me to cherish as an Artist and also as a Railway enthusiast.

A good day was had by all.

Who will commission me to create a scene portraying the famous blue Sir Nigel Gresley Locomotive no 60007?