This is my tribute to four great actors chosen by Verity Lambert (BBC Producer in the 1960s) to play the leading roles in the science fiction legend TV serial Doctor Who, which began and was transmitted on November 23 1963.

I was inspired to create this painting by watching The Mythmakers tribute video to Jacqueline Hill, which I found moving.

WILLIAM HARTNELL (Doctor Who) impressed Verity with his performance as Johnson in This Sporting Life.

CAROLE ANN FORD ((Susan , The Doctor’s Granddaughter) had been a child actor from 8 years old and had appeared in Dixon Of Dock Green. Carole played Jacky in the 1963 BBC suspense play Man On A Bicycle .

Alvin Rakoff (Jackie’s husband and Film Director) was a friend of Verity’s and had admired her acting in Maigret.

RUSSELL ENOCH (Ian ) who had used the stage name William Russell had been admired by Verity for some time. Russell used to play Sir Lancelot in the ITV series The Adventures Of Sir Lancelot. 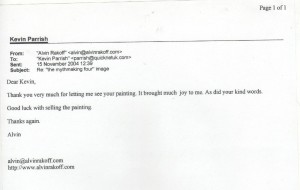