This painting was commissioned by Klaus Jensen, a Moody Blues fan from Denmark.

Klaus wanted a similar look to the cover monochrome painting on the gatefold sleeve cover of the Moody Blues album Long Distance Voyager released in 1981.

Klaus had read in the Moody Blues Higher and Higher magazine issue 31 (USA), that the bass player John Lodge, had bought the original painting at an Antique shop in South London. He had it reconditioned and reframed it. 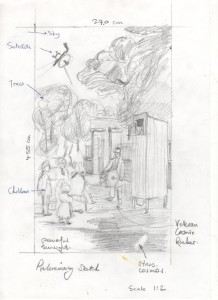 (to suit specific dimensions supplied by the Commissioner)

The main points that the Commissioner wanted included in the sketch were as follows:

The Voyager (satellite at top of painting, viewing the show below and transmitting the Show elsewhere)

The Actor (the Punch and Judy Theatre)

The audience, specifically the Children.

Blue and grey colour on ground and trees.