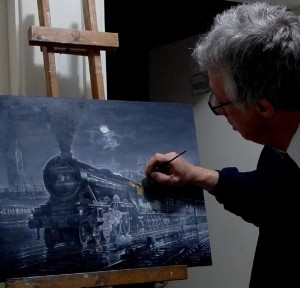 Kevin, the Artist at work on his Flying Scotsman train painting in 2012

at his studio in Leamington Spa

Kevin was born in Birmingham Warwickshire in 1953 with an English and Welsh background.
From an early age he had a love of drawing family portraits, steam locomotives and Daleks from the TV series Doctor Who.
He has many interests including Railways, Music, Nostalgia, Science Fiction, Art, Architecture, Astronomy, Sport, the Natural World and more.

After he left secondary school and college with “0” levels he wanted to go to Sutton Coldfield Art College and pursue an art career.
But his parents wanted him to find a proper, routine 9-5pm job and bring some income into the Parrish family home.
In 1971, he found a full time job as a Trainee Draughtsman in Civil/Structural Engineering at a Consulting Engineering company in Sutton Coldfield, Warwickshire.
His employers asked him to undertake a Day release Building course at his local College which ran concurrently with his employment.
Once his apprenticeship was complete with accompanying qualifications to HNC level, his career in Civil Engineering was assured.
In 1995 after a successful career in UK and overseas as a Contract Technical Engineer he was finally made redundant from a Consulting Engineers in Birmingham because of a deep recession in the construction industry.

At this point Kevin decided to change his career and pursue his first love, which was Fine Art.
A decision he has never regretted.
Undertaking an Art course at Mid Warwickshire Leamington College in 1995 helped him realise the potential of what he could undertake creatively as an artist.
He soon became inspired to convert some of his lifetime interests and experiences into ideas for creativity onto the artists canvas.
His preference was to use the oil medium as it seemed to suit his style best.

Kevin and his love of railways wanted to pursue Railway Art after seeing Terence Cuneo’s art on the front cover of a Triang Model railway catalogue in the early 1970s.

He realised what a railway artist could achieve on the canvas and wanted to join the local Guild of Railway Artists group based in Warwick formed in 1978 to help promote his ideas.

Cuneo is regarded by many as the Railway Artist of the Century because he was so versatile and prolific as an Artist.

Kevin was accepted and joined the Guild of Railway Artists in 1993 after submitting four railway paintings for the panel to judge.
As an Associate member he exhibited with the Guild around the country.

Over the years he has been invited to attend Steam Preservation events (eg. the Great Central Railway) as a stall holder promoting his Railway Art and secured commissions by meeting steam railway enthusiasts there, who were fascinating to listen to with their steam railway memories.
Kevin’s railway art can be found in Books, Magazines, on Jigsaw Puzzles, Prints; Greeting cards, Postcards and on Youtube videos etc.

He regards it as an honour to be a Full member of the prestigious Guild and it has given him more credibility as a Railway Artist.

As a music lover from the swinging 60s, Kevin has created many montages paintings relating to the symphonic band The Moody Blues formed in the 1960s.

These image montages of the band were promoted through their fan club on the front covers of newsletters at the time in UK and USA during the 1990s and beyond.

He also created montages of his favourite rock band Yes and his art was to be used in a Yes Documentary DVD in 2006. managed by Impact Films.

Kevin’s Cliff Richard and the Shadows montage art was promoted through charity events in the Dynamite International Newsletter in the 1990s.

As a fan of Doctor Who from its inception in 1963, Kevin also created several montages of the BBC TV sci fi programme.

His art is renowned in the Doctor Who world through a Doctor Who jigsaw puzzle published in 2007, named Who’s Who and can be found at retail outlets in Fandom, conventions, charity events and merchandise and on Amazon website.

In 2000 his Fine Art was promoted by Acanthus Gallery in Balsall Common where he learned many techniques in Fine Art and undertook Projects and commissions in various genre.

In 2001 Kevin was invited to become the Resident Artist at the Jane Powell Art Studio in Kenilworth, Warwickshire.
Here he gained a growing interest in the canal network in the Midlands, encouraged by fellow artist Jane Powell (who was the proprietor at the Studio/Gallery) and her cousin Marie.

He went on to create many canal/railway scenes with help from his own photos taken insitu while walking along towpaths on the canal network.

His artwork became renowned in the Inland Waterways world, appearing on their greeting cards along with other greeting card and jigsaw publishers etc.

He joined The Fine Art Trade Guild in 2002 and was part of a Touring UK Exhibition that year.

In 2002 he was promoted as a Fine Artist by Warwick Studios Gallery based in Leamington Spa.

Here he had two solo sell out exhibitions one in 2005, “The Tapestry of Life” and the other in 2008, named “Vanishing World” portraying life in the UK during the 20th century in monochrome oils in a nostalgic traditional artwork style.

The proprietors of the Gallery celebrated my success by kindly taking me out to a local restaurant to dine with some of the art lovers who had bought my paintings during the exhibitions.

From 2006-2008 he was invited to be a Resident Live Artist in Warwick Studios Gallery.

A role he enjoyed as he had opportunities to meet the art loving public in person while in the Gallery, which sometimes led on to him, the artist being commissioned to create a painting for them.

Kevin always regarded this as an honour.

Other tasks included framing paintings for customers, generally helping out running the Gallery, including help hanging exhibitions and of course painting on the easel in front of a Live audience on the canvas in between serving customers.

In 2009 Kevin was invited to join the Mitchell Gallery in Warwick.

Here, he had continued success with a solo exhibition, creating monochrome oil paintings in a similar style to what he achieved with Warwick Studios Gallery.

However his paintings of buildings in Warwick at night with the glow of the moon and emphasis on reflections from wet surfaces, was from an idea by Kevin and the Gallery.
Kevin was now working at his Studio from home.
Kevin continued to exhibit his art with the Mitchell Gallery alongside other Artists until its closure in March 2018.

The Gallery kindly devoted part of its space to permanently exhibit his artwork known as “The Warwick Collection” until its closure.

From 2009 till 2013 Kevin was invited as a “Live” Artist meeting the public at the Leamington and Warwick Model Railway Society Exhibitions annual weekend events, which took place at Stoneleigh Exhibition Halls in Warwickshire.

In 2011 he joined the Leamington Lawn Tennis and Squash Club.

This Club is the first ever lawn tennis club in this country and the world and was founded in 1872, five years prior to Wimbledon SW19, London.
At the Club he felt inspired to create portraits of British Wimbledon champions Andy Murray and Ann Jones portrayed in front of the entrance to the Leamington Lawn Tennis and Squash Club.

These images were exhibited in their Club House for many years.

Many members of the club have commissioned Kevin as an artist.

In 2012 the Mitchell Gallery asked me to come and paint in the Gallery as a Resident Artist for awhile.

I enjoyed working there and meeting the public occasionally.

I heard the TIMELESS BEAUTY of the St Mary’s Church bells now and then. It was delightful.

In 2013 Kevin was commissioned by the Deputy Mayor of Warwick to create a painting in monochrome of The Court House in Jury Street Warwick, based on the Warwick Collection style of painting.

The Project was to commemorate the 1100th anniversary of the towns history and the buildings completed restoration in 2014.

The Deputy Mayor became Mayor of Warwick in 2014 and now owns many of my original pieces of art from my Warwick Collection in her home in Leamington Spa.

A highly successful venture which helped finance the restoration cost.

The famous Thomas Oken tea rooms in Warwick also exhibit a print of the Court House on show to customers.

Kevin has donated his artwork to various Charities over the years, including Science fiction conventions, Police Charities and the Moody Blues Fan Club in Surrey UK and in the USA.

In Nov 2017 he won a prize in the world of Doctor Who with “100 Illustrated Adventures” sponsored by Penguin Books.

In 2018 Kevin became a sponsored visual Artist supporting “The Foresters’ Fund For Children” by advertising his artwork in the charity’s handbook.

From June 2018 his artwork was showcased at Lott Bazaar Art Gallery in Clemens St.,  Leamington Spa

In 2018 Kevin exhibited his railway art at Railart 2018 Exhibition with the Guild of Railway Artists at Kidderminster Railway Museum on the Severn Valley Railway.

He has won awards and prizes over the years as a Fine artist pursuing his passion.

In 2019 Kevin’s transport artwork was accepted by the Science and Society Picture Library based in London, which is affiliated to the National Railway Museum in York

In 2019 Kevin exhibited his railway art at Railart 2019 Exhibition with the Guild of Railway Artists at Kidderminster Railway Museum on the Severn Valley Railway.

In 2019 Kevin joined the Friends of Leamington Station.

A group of volunteers who maintain the gardens on Platform 2 of Leamington Spa Station.

The Friends won a prize for the best kept station gardens in the country in 2009 and again in September 2021, this time from the Royal Horticultural Society and Heart of England in Bloom with a Level 5 Outstanding Its your Neighbourhood Award for Leamington Station Gardens .

His images depict famous steam locomotives visiting Leamington Spa Station with a backdrop of the gardens on Platform 2, created and maintained by the Friends of Leamington Station

Kevin’s artwork can be found in private art collections in UK and overseas.