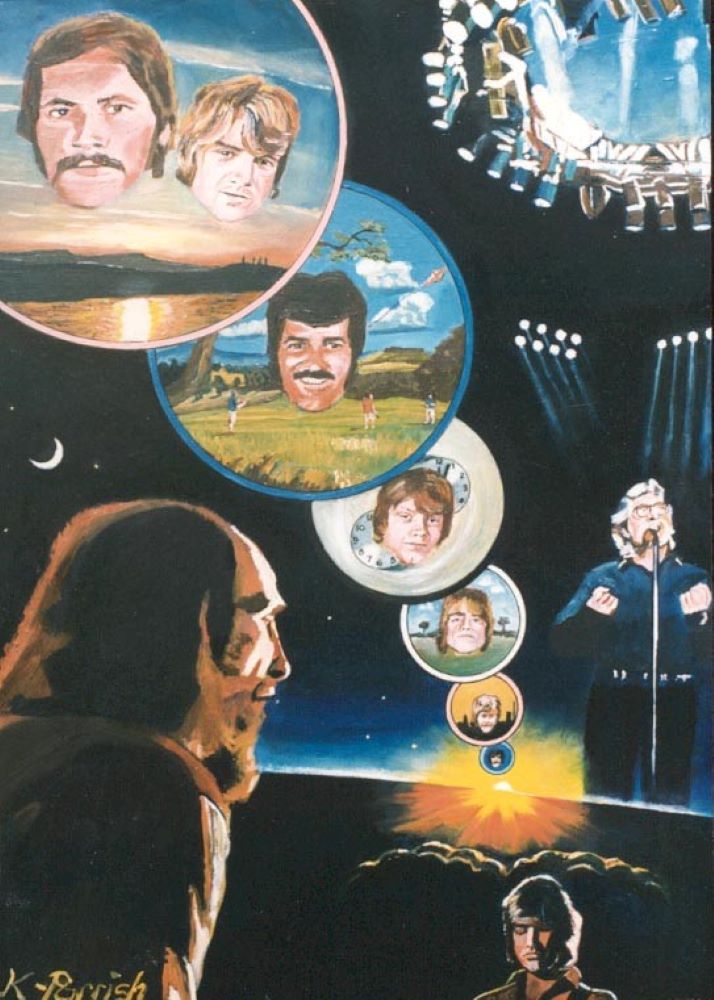 Perhaps the finest Moody Blues album ever . The sound of the orchestra compliments the Moody Blues songs perfectly.

The concept of the album is the day in the life of an ordinary person from Dawn to Sunset.

We see Mike Pinder witnessing the wonder of a sunset, in recognition of Mike’s song of the same name.

Graeme Edge recites his poem at the end of the day. ‘ breathe deep the gathering gloom etc’.

This is my tribute to one of the greatest albums ever released in my opinion, “Days of Future Passed”, along with the other six vinyl albums made by The Moody Blues from 1967 to 1972.
I discovered “Days of Future Passed” by the Moody Blues around 1971, after wearing out the grooves of ‘Question of Balance’ and ‘On The Threshold of a Dream’ albums on vinyl, from constant playing on my stereo hifi record player in 1970.
As well as the music to listen to, there was the gatefold sleeves to look at and into and one could follow the music with its lyric sheet found inside the album cover sleeve.
Unfortunately there was no lyric sheet inside the “Days” album and no gatefold sleeve either.
However the songs were sung by vocalists who sang clearly, so I could hear every word.

The Sunset
(from an original oil painting by Fine Artist Kevin A Parrish)
“take a look out there, planets everywhere”
We see Mike Pinder looking at the setting sun after the end of a single day.
“I can see it all from this great height, I can feel the sun slipping out of sight and the world still goes on through the night”.

For me, “Days” does have a magic and beauty about it when listened to, with a blend of beautiful harmonies, voices and instruments and the spoken poetry adds emotional drama to the overall impact of the album.

With this in mind, I was inspired to create a piece of Art, please see above.

The music plays as one piece of music along with the story arc of a single day, with the classical pieces segued together with the Moody Blues songs.

Tony Clarke and Derek Varnals were regarded as pioneers with this idea and were behind the ground breaking concept album, rather than have a collection of individual songs on one album.
The music and lyrics are timeless and are as relevant today as they were when the album was made and released in 1967.
Tony won a Platinum Disc award for “Days of Future Passed”

I now have the “Days of Future Passed” stereo remastered CD released in 2008 with the bonus tracks on.
Great to hear these timeless songs again.
The Moody Blues will always be at the centre of my musical universe.