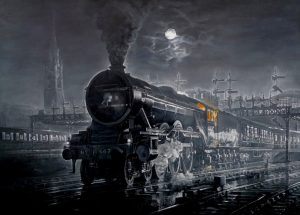 The beautiful elegance of the majestic Flying Scotsman bathed in moonlight

The Flying Scotsman (portrayed above pulling out of Newcastle Upon Tyne Station in the 1930s) is now back on the rails for tests using the East Lancashire Railway on the 8 January 2015, after extensive restoration work on the Locomotive dating back to 2006. 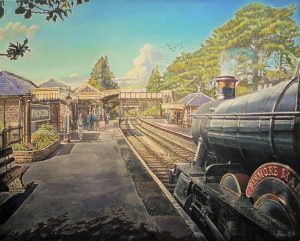 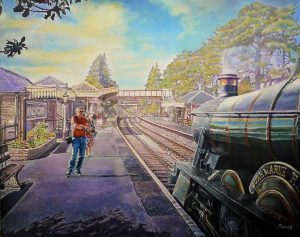 Passengers patiently await the arrival of the elegant Foremark Hall into Winchcombe Station on the GWSR. 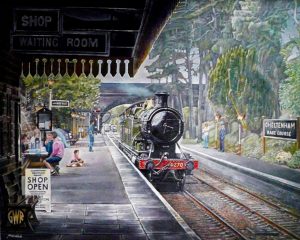 I have been involved with the GWR since 2013, creating Railway scenes in oils, portraying Toddington, Winchcombe,,Cheltenham, Gotherington and Broadway Station.

These images have been used on Jigsaw Puzzles which are for sale in the Toddington platform shop.

Other merchandise including Postcards and Greeting cards are also for sale.

Occasionally I go to Toddington Station and meet some of the volunteers working there and admire the great job they do running the Railway.

I also catch up on progress with the re construction of Broadway Station, which is now complete.

I take the opportunity to have a train ride from Toddington station.

Enjoy a great day out by visiting the Gloucestershire Warwickshire Railway.