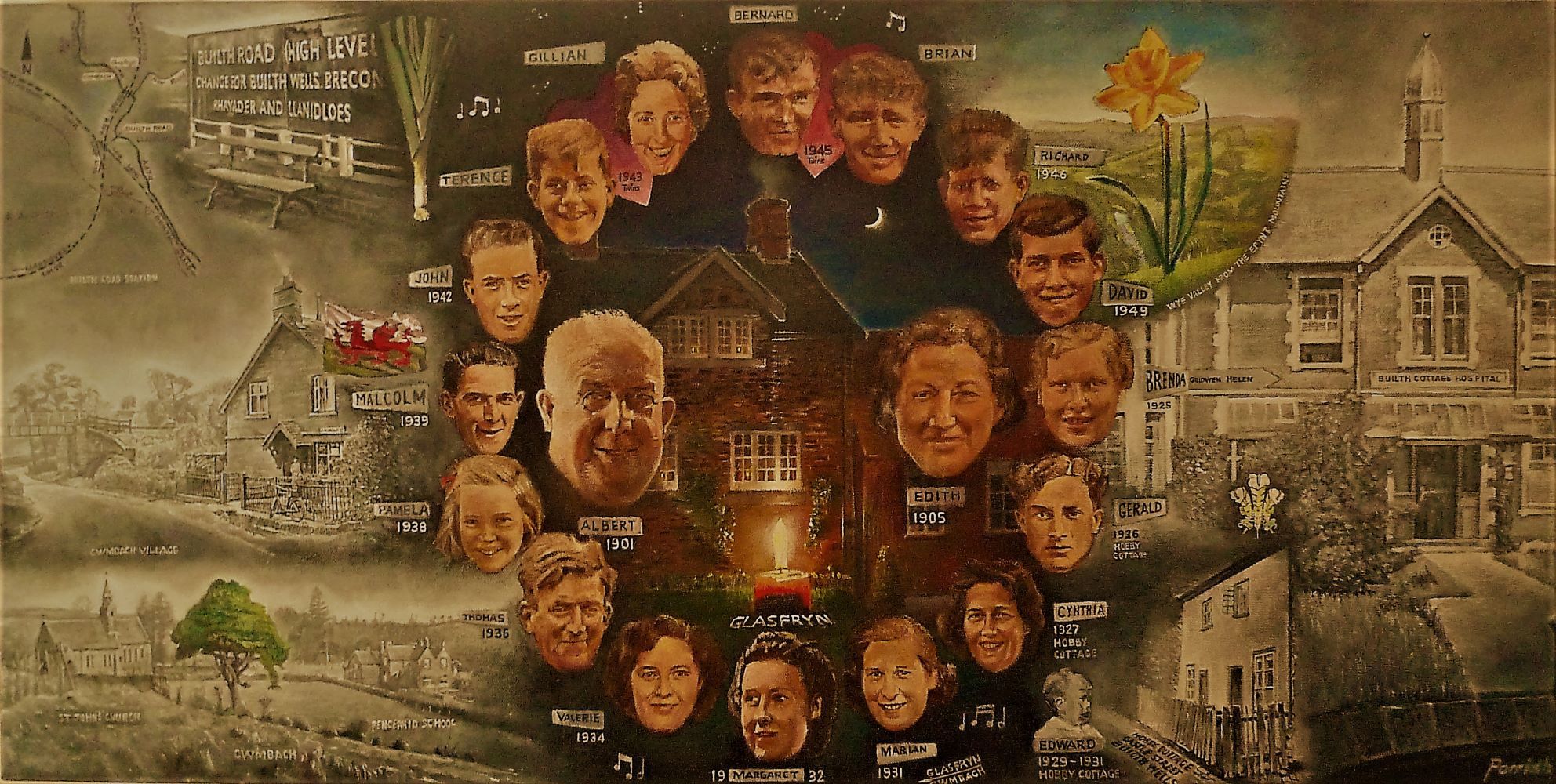 Albert and Edith were married in 1924 at Builth Memorial Chapel, Builth Wells

The family moved to a two storey, semi detached cottage in a village called Cwmbach in 1933.

The cottage was called Glas Fryn and had 3 bedrooms.

Cwmbach is 3 miles north of the market town of Builth Wells in Radnorshire.

The family lived there until 2018 when it was sold by siblings Gill and Bernard Mason.

The Mason Family were educated to speak English only.

The Prince of Wales Feathers 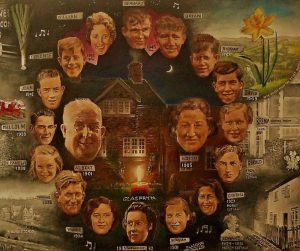 This oil painting is dedicated to Kevin’s mother (Mrs Cynthia Jean Parrish) who was the third child born in 1927, to Mr and Mrs Albert and Edith Mason.

Kevin’s father (Mr Victor Albert Parrish) took many family gathering photographs over the years and for this he is eternally grateful as it made the creation of his painting possible.
He has used many of his fathers black and white family portrait photographs to help him create colour portraits of his family and hopefully likenesses as well (see above)

Also a big thank you to Mr and Mrs John and Sandra Mason based in Bromsgrove Worcestershire for supplying archive photographic material and verbal information on the Mason family to help Kevin tell the story for his painting.

The cottage was bought by the Albert Mason in 1953, ending a tenancy agreement from when they first moved in.
Kevin, the Artist, has been following the movements of the Mason family over the years and how they have spread the world with their offspring now living in Wales, England, Canada and Australia.
It has always been a pleasure to meet members of the family from time to time and this has inspired him, the Artist to create a visual appreciation of their lives on the canvas.

THE CONCEPT FOR THE OIL PAINTING

The inspiration for the painting came when Kevin asked his Mother out of curiosity about her childhood and upbringing at the Mason family home of Glas Fryn in the 1930s.
She mentioned there was no electricity and that candles were used for lighting.

Candles and their light were the inspiration for this painting and how it symbolises life.

Kevin had found the “spark” for his inspiration.

The main focus of the painting is the two storey home of Glas Fryn Cottage, portrayed at night with candles lit and the adjacent building called the “Iron Room” on the right.

The painting also portrays elements of the surrounding family background.

Brenda (the first child) was born in 1925 at Builth Cottage Hospital in Builth Wells.

Brenda’ s home at this time was Little Hall in Llanysis near Builth Wells.

Gerald was born there before the family moved to Hobby Cottage in 1926 where Cynthia Jean, Edward Colin, Marian and Margaret were born before finally moving to the family home of Glas Fryn Cottage in 1933 where all the remaining offspring were born up till 1949.

Sadly, Edward Colin died in a road vehicle accident outside his home at Hobby Cottage aged 2 years. He was hit by a bread delivery van.

The family attended Pencerrig Primary School in the village of Cwmbach for their education, with St John’s Church nearby providing Sunday School religious education (both depicted in his painting)

Cynthia attended Sunday School from 2-4pm during her childhood along with other family members.

We have the village shop owned by Mrs Morgan, where many provisions were purchased by the Mason household conveniently located on the opposite side of the road from Glas Fryn.