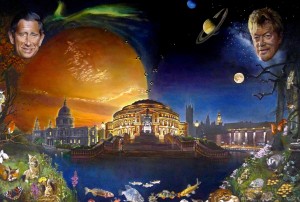 The orchestra plays the Planet Suite inside the Royal Albert Hall, London and the sound of the beautiful music reaches out above into the cosmos. Who knows who may be listening.

(endorsed by Roger Scruton, Philosopher and creator of the TV programme ‘Why Beauty Matters’ first shown in 2009)

Most of my artwork has been developed from sketches, including my surreal compositions. These were inspired by looking at words and lyrics composed by various musical musicians/luminaries. From this I visualized my thoughts in my minds eye and interpreted them into a sketch.

The canal scenes and some of my railway scene paintings are created from my own photographs.

However when creating a period scene, I do some research and change the look of a painting to suit the period.

based in Royal Leamington Spa from 2002. 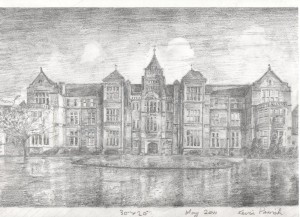 The Warwick School Project from Inception to Canvas

Warwick School in Myton Road, Warwick was a challenging piece of architecture to paint and it was commissioned by the Mitchell Gallery in Warwick during 2011.

I first prepared the outline faintly on the canvas by using a soft pencil. Then carefully measuring up by ratio sizes from the photographs to gain a degree of accuracy. At this stage, I was working on my drawing board, which I used when I was a Draftsman in my former career.