Inspired by the Doctor Who Group in Royal Leamington Spa called Planet 14.

The Cyber Planner uses the reference Planet 14 in its conversation with Tobias Vaughn, when it states that the Doctor has been seen on Planet 14.

One of the best Doctor Who stories ever made, in my opinion.

Kevin Stoney who plays Tobias Vaughn is a marvellously realised character and gives a chilling performance alongside the Cyber Planner.

Spread over 8 episodes gives the story an epic feel of adventure, coupled with the superb music score soundtrack which really captures the mood of the story. 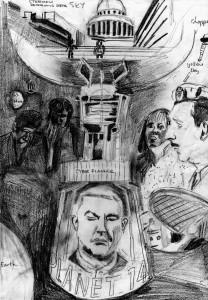